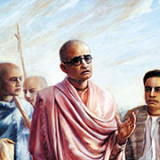 Dramatic enactment of the life of Srila Bhaktsiddhanta Sarasvati Thakura, the Spiritu

The video biography of the spiritual master of His Divine Grace A.C. Bhaktivedanta Sw