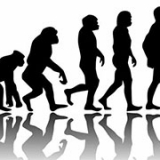 The Theory of Evolution

Charles Darwin formulated the theory of evolution based on the presumption that by gradual incremental changes caused by random changes in an organism some would be favorable for the survival of the organism and some would not be. So the theory is gradually one species will change into another species through such gradual random changes. Unfortunately there is no proof for this theory and in fact it is incorrect. The reality is the blueprints for the 8,400,000 species of life are stored on a more subtle platform so even after the whole universe is destroyed that subtle blueprint of the 8,400,000 species will remain and upon the creation of the universe again the exact same 8,400,000 species will become manifest. So there is no evolution of the bodies. There is an evolution of consciousness through the bodies. But one species will never change into another species.